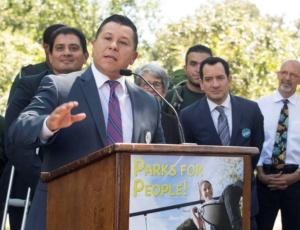 “I am excited to announce a major local parks victory – Mecca, Calexico, and Heber will be receiving over $15 million in Proposition 68 funds for park projects. These are exactly the types of investments we have been pushing for since arriving in Sacramento. Our work with Proposition 68 created the largest California funding opportunity prioritizing parks in our most underserved communities, like those in my district. These are investments that create a wide spectrum of positive benefits and will pay back dividends in increased quality of life for our residents,” said Assemblymember Eduardo Garcia, joint author of Proposition 68 and Chair of the Assembly Committee on Water, Parks, and Wildlife.

Two projects in Imperial County were awarded. The City of Calexico was allocated $8,500,000 to expand Heber Park including a new multi-purpose gym, outdoor basketball court with lights, a soccer field with lights, walking trail, athletic track, picnic areas, and seating throughout the park. The Heber Public Utilities District will receive $700,000 to renovate and improve their children’s park.