The Alement in Yuma, Arizona hosted their first musical performance of the year 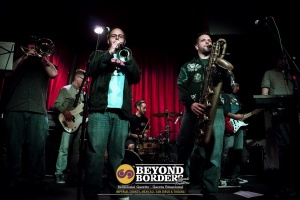 Yuma, Arizona.- Music and culture is thriving in Yuma. The Alement in Yuma, Arizona hosted their first musical performance January 11th, 2019 with East Los Angeles Ska staples, Matamoska, the Imperial Valley’s own, EPIC XVIII, and for the first time in the United States Los Motosiacos, Rockabilly from San Luis Rio Colorado, Sonora, MX. The Multiple Arms Productions’ event brought together an eclectic mix of greasers, skankers, and music lovers from all walks of life.

Audience members could not ask for more Friday night. Los Motosiaco’s started the evening with a traditional rockabilly set which included a Roy Orbison and Johnny cover for the classic rock ‘n’ roll lovers. For their for the first time ever in the United States, this Mexican Rockabilly band understands what it takes to get the crowd moving and jiving to the music. With only a year under their belts as a band, this band is still fresh to the scene.

Unlike, the opening act, EPIC XVIII (EPIC 18) is no stranger to Yuma and The Alement, having played at the venue a little less than a year ago with the Koffin Kats and at other various locations in the area. This up-and-coming ska group’s offers their own blend of ska, incorporating Jazz, Funk and Rock into their two-tone sound.

They progressively increased the intensity of their set finishing with an original song, “Outlaw” that got the crowd dancing and skanking about. Playing an all original set on Friday night, EPIC XVIII said they are currently in the process of re-recording their first full-length album set to be released in mid-April and slated for another full-length album expected to be completed following their first albums re-release.

This collection of Imperial Valley educators and business owners is also the house band for the Late Late Later Show with Garry Bushell coming later this year.

Headliners and East Los Angeles Ska staple, Matamoska, made sure that everyone at The Alement understood why they have been movers and shakes in the ska scene, both domestically and afar, for over the last 18 years.

In an interview with frontman and rhythm guitarist, Jose Padilla, he spoke about the music scene in Yuma and what is to come in 2019 for Matamoska. “In Yuma, it feels like you connect with people better,” stated Padilla. Matamoska must connect well with Yuma because of the 75 people in attendance for the touring act, their skanking pit took up a large portion of the front half of the venue.

Fans of Matamoska will be happy to know that in 2019, the band is already preparing to release a brand new full-length album and will be touring around the country including a set at Ska by Skawest and upcoming shows with Mustard Plug and La Banda Skalavera.

Although The Alement may not be the largest venue in town, they have hosted some of the most well-known and up-and-coming acts in the Ska, Rockabilly, Reggae and Latin Rock genres. With the help of owner and operator of Multiple Arms Productions, Jose “El Kooks” Ruiz, the 2019 event calendar will continue building from the success of 2018. Together last year, the production company and venue organized over 40 live events inviting artist such as the Koffiin Kats (Detroit Psychobilly), Be Like Max (Las Vegas Ska), and international artists like The Bar Stool Preachers (UK Punk) to play for the small Arizona bordertown; they are also paving the way for local entertainment by supporting musicians from Yuma, Mexicali, Sonora, and the Imperial Valley.

For more information about upcoming events at The Alement or from Multiple Arms productions follow them on their social media.