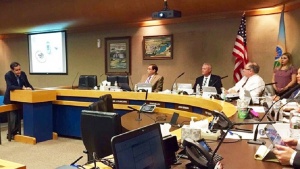 It is known that a strong binational relationship can bring economic prosperity to a region. Imperial County and Mexicali are divided by a fence but share a common history with each other for more than 100 years.

Most recently, PIMSA Industrial Developers from Mexicali reached out to the Imperial County Board of Supervisors to look for a partnership agreement and work together in economic development efforts.

Since 1966, PIMSA was the first private organization specialized in industrial development in northern Mexico.  PIMSA are active members of the U.S.A National and Mexican Industrial Park Association.

PIMSA Vice-President, Xavier Rivas, approached the county to begin talking and entered into an agreement that will explore economic development opportunities and promote the Imperial Valley-Mexicali region as one, globally.

Rivas, has been Beyond Borders Gazette’s “Success Story” in the past and contributor, has always been a promoter of binational collaboration and economic development. He has proposed in the past the “Twin Plant” concept. The first Twin Plant from PIMSA is located in Yuma, Arizona as Martech opened a plant in Yuma thanks to the efforts of Greater Yuma Economic Development Corporation.

“Thanks to your publication, Beyond Borders, we have tried to send a signal to make a presentation to Imperial Valley Board of Supervisors and so they have already assigned Supervisor John Renison to take on this issue,” Rivas said.

Rivas has stated in the past that he would like to do a vocational study to see what industries should come to the Imperial Valley.

The Imperial County Board of Supervisors recently approved a Memorandum of Understanding with PIMSA at their January 23rd meeting.