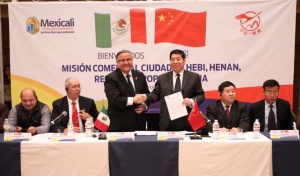 Mexicali, B.C.- With the purpose of strengthening the mutual cooperation and friendship between Mexicali and the Chinese city Hebi, municipal authorities of both communities, headed by the Municipal President of Mexicali Gustavo Sánchez Vásquez and President of the Standing Committee of the Municipal People’s Congress of Hebi el Quanxin Shi, held a first meeting on January 14th, that led to the signing of a Memorandum of Understanding between both towns, which provides the basis for taking advantage of the opportunities for commercial, tourist and cultural development between the two cities .

The Mayor of Mexicali Gustavo Sánchez Vásquez explained that this document gives rise to business ties. During the meeting, the distinguished visitors were made aware of the advantages that Mexicali has to promote both economies, strengthening economic development and positively impacting the residents of Mexicali and Hebi.

The meeting was held at the Casa de la Cultura, where ten delegates from Hebi and 40 Mexican attendees met, to whom the Mexican Mayor welcomed, reiterating the history that links the two cultures as well as the achievements that Baja California’s capital has to attract foreign investment.

“Hebi is the city of the” cliffs of the cranes “and Mexicali is the city that caught the sun. Today we feel that the cranes of Hebi have flown to Mexicali and we hope that soon we can take the sun from Mexicali to Hebi’s sky,” said the mayor.

Sánchez Vásquez stressed that, in the last 50 years, the arrival of foreign investment like the Asian one, particularly in the manufacturing industry of transformation, has been along with agriculture a pillar of the Cachanilla economy which demonstrates the opportunity that represents Mexicali for foreign investments.

After the protocol, the visitors proceeded to take the photo of the memory as well as enjoy a cultural program run by the Municipal Institute of Art and Culture (IMACUM) and some traditional appetizers.

On behalf of the Municipal Government, Mexicali Mayor Gustavo Sánchez Vásquez accompanied the president of the Industrial Development Commission of Mexicali (CDIM), Mario Juárez de Lopez de Nava; of the Industrial Development Commission of Mexicali, Manuel Rubio Director of Promotion of the Secretary of Economic Development (Sedeco), representatives of the local business sector as well as Area Directors of the 22 City Council and councilors of the Mexicali City Council.