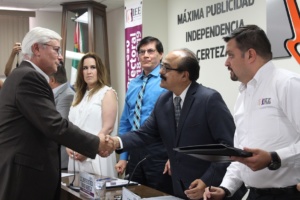 MEXICALI, B. C. – The General Council of the State Electoral Institute of Baja California (IEEBC), headed by its president, Clemente Custodio Ramos Mendoza, declared the validity of the election to the Governorship of the State on Tuesday.

The foregoing was established during the work of the Forty-Third Extraordinary Session, in which the opinion presented by the General Council of this electoral authority was submitted for discussion.

According to the project presented before the plenary session, derived from the results of the state calculation the citizen Jaime Bonilla Valdez, nominated by the coalition “Together We Will Do History in BC” and integrated by the parties Morena, Labor party (PT), Green Ecologist of Mexico (PVEM) party and Transformemos, was the candidate who received the most votes during the day of June 2 in the Ordinary Local Electoral Process 2018-2019.

In the analysis that forms the opinion, it is established that Bonilla Valdez satisfies the eligibility requirements established in articles 41 and 42 of the Political Constitution of the Free and Sovereign State of Baja California and 134 of the State Electoral Law, so that he was declared Governor-Elect to hold office during the period from November 1, 2019, to October 31, 2021.

To finalize the agenda, the General Council issued the certificate of majority and validity to Jaime Bonilla, as well as a certified copy to the State Congress.