BAJA SPEAKS ENGLISH WILL BE HELD 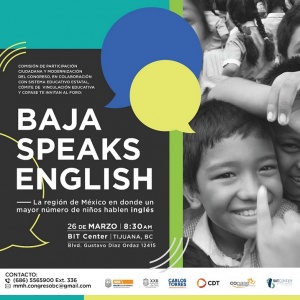 Tijuana, Baja California, March 24, 2019.- Next Tuesday, March 26, the Forum called Baja Speaks English will be held in the bit center of Tijuana, an activity that seeks to achieve concrete agreements for the widespread growth of the English language in the region.

The idea of the project arises from the President of the Board of Directors of the Baja California Assembly Carlos Torres Torres in conjunction with various leaders involved in the language teaching system who intend to achieve a design of strategies to bring Baja California to a better position within the English proficiency as a second language in the Country.

The activity will feature the participation of different speakers with experience in teaching the English language, including Luis Von Ahn, creator of the digital platform Duolingo, which site of digital access is a social project aimed at free language learning, in what the English language learning respects, at least 110 million people have already used it. Von Ahn is considered one of the 50 best brains in science according to discovery and qualified as one of the most influential people in technology according to silicon.com.

The event is also expected to have the presence of more specialists with successful experiences in the field such as Manuel Mata from Costa Rica, Alfredo J. Postlewhite Duhagón from COPASE who will share the advances of the escuelanet project, as well as other participants from business organizations, diplomatic areas and educational centers of the region.

The Assemblymember Carlos Torres Torres said that this forum is an opportunity to move from the realization of events to the generation of a concrete agenda of actions and steps to follow to open more development opportunities for those who reside in Baja California, the legislator said that the English language proficiency provides more opportunities for young people.

The entrance to the forum “Baja Speaks English” will be free and the doors of the bit center will be opened for registration of the participants at 8:30 in the morning this coming Tuesday, March 26.