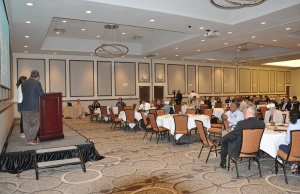 Having a strong region and becoming competitive in the world’s economy was the goal of the second Mayor’s Summit held in Yuma, Arizona on March 15.

The Mayors, along with their county and city staff, arrived at the Pivot Point Hotel Conference Center for the one day conference where they discussed on how to make the region stronger by combining the strengths of the 4FrontED. The three breakout sessions topics included economic development, tourism, and education/workforce.

The mission of the 4FrontEd initiative is to: Facilitate trade relationships; support business growth; strategize to maximize resources; and connect investors with opportunities.

The 4FrontED region includes Yuma, Somerton, Wellton and San Luis in Arizona, as well as San Luis Río Colorado, Mexico. The Cocopah Indian Tribe is a recent member of the initiative. The Mayors Summit opened the opportunity for Mexicali and Imperial Valley to have a more active participation.

This Summit was a follow up from the first meeting held last year in Mexicali, organized by Mexicali Mayor Gustavo Sanchez in order to bring the mayors of the region together and work on common issues that affect the border region, a replica to the previous Summit hosted by San Diego Mayor Faulconer and Tijuana Mayor Gastelum, a continuation of the work by the already established “Border Mayors Association”. The follow up meeting was hosted by Yuma Mayor Douglas Nicholls. Mayor Nicholls stated this was the execution of the work-study group held in Mexicali regarding economic development.

Although in 2011 the Border Mayors Association was formed, including the Mayor of Nogales, who teamed up to promote the positive side of their communities while combatting a negative image of crime and violence associated with Mexican drug gangs. Then, Nogales Mayor Arturo Garino and representatives from 13 border cities formed the US.-Mexico Mayors Association during a summit in Tucson that year.

Mayor Garino said then that he quickly learned his city wasn’t the only one with a negative image problem. He says mayors from Laredo and Brownsville, Texas, and even San Diego were facing the same thing and almost everybody was hurting economically because of the perception that things aren’t safe.

Back in 2011, the U.S. Customs and Border Protection Commissioner Alan Bersin urged the mayors to form an alliance to better lobby Washington for federal assistance on border issues, another goal the ongoing binational alliance seeks, besides working together with border cities mayors from both sides of the border in an aim to finding solutions about shared concerns and issues on environment, education, public safety, and economic development.

“I see this as a direction that can look at the region as a whole and bring greater prosperity, greater growth, and combine our strengths and fill any shortcomings we have,” Mayor Nicholls said.

El Centro Councilman Efrain Silva agreed that they need to see themselves as a region to compete to attract jobs and have a better workforce on both sides of the border now that the Imperial Valley has began to actively participate in the 4FrontED.

The next Summit will be held in San Luis Rio Colorado, Sonora on April 28 which will focus on environmental issues. The following will take place in El Centro, California hosted by Mayor Cheryl Viegas-Walker, on May 18, and will focus on public safety.