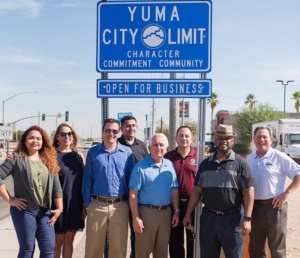 Mayor of Yuma, Douglas J. Nicholls, along with the Yuma County Chamber of Commerce and Greater Yuma Economic Development Corporation unveiled the “Open for Business” signs in Yuma.

More than simply City signage that reads “Open for Business,” the unveiling was an opportunity to talk about Yuma’s fast growth and economic development.

The group came together to unveil a city sign near the northeast corner of Avenue 3E and ‪40th Street in Yuma.

“I’m grateful to have industries who recently located in Yuma represented here with us today. It’s more than about new roadway signage. Being truly ‘open for business’ means Yuma and our economic development partners work day by day, year after year to foster an environment that cultivates business opportunity, supports existing entrepreneurs and new industries, and continues to work together.”