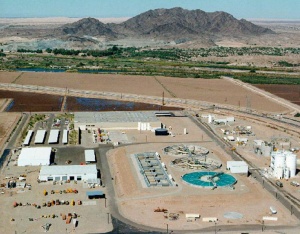 Yuma, Ariz. – On Thursday, October 12, 2017, the Bureau of Reclamation’s Yuma Desalting Plant (YDP), located at 7301 Calle Agua Salada, will conduct a test of its emergency chemical alarm system. The test will be conducted to verify that the plant’s emergency readiness system is fully operational to support evacuation and safety procedures in the event the facility experiences an incidental chemical release.

The test will involve sounding the siren alarm multiple times to ensure the system is operating effectively.

Between 8:00 a.m. and 11:00 a.m., Mountain Standard Time, the YDP’s Chemical Alarm Siren System (CASS) will be activated for a period of no more than 10 minutes for several periods to determine if the system is operating correctly. The alarm system is used to inform YDP or Yuma Area Office (YAO) employees to shelter-in-place and to notify the on-site Emergency Response Teams to assemble and prepare to respond.

Designed to alert both on-site employees and nearby residents about an impending emergency condition at the YDP, the CASS siren can be heard several miles away from the facility.  No action or response is necessary from residents or businesses located off-site of the YDP during the emergency test procedure.

YAO regularly conducts these tests to verify the system is working correctly in the event of an actual emergency.

Reclamation is the largest wholesale water supplier in the United States, and the nation’s second largest producer of hydroelectric power. Its facilities also provide substantial flood control, recreation, and fish and wildlife benefits. Visit our website at https://www.usbr.gov/lc and follow us on Twitter @USBR.