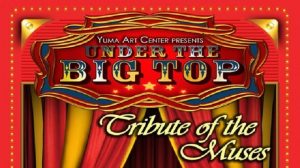 A longtime staple in the Yuma arts community won the area’s top arts award Friday night, while a couple who use their business as a venue to host musicians and arts was named the top newcomer.

The Tribute of the Muses Award went to George Tomkins, a longtime area artist, and educator. After retiring in 2004 as a full-time faculty member from Arizona Western College, where he had been an art professor since 1973, Tomkins continued to work in his studio at Tomkins Pottery and also teach at the college. His work is included in numerous private and public collections including Arizona State University, the Tucson Art Museum, the Phoenix Airport Collection, the City of Yuma, and the Arabia Ceramics Collection in Finland. Recent publications include two Lark 500 books: Raku and Plates, Platters and Chargers, and Ceramic Extruding by Jean and Tom Latka. Tomkins formerly chaired the City of Yuma Arts Commission and is heavily involved with Yuma Art Symposium.

The Helios Award for the top newcomer went to Travis Krizay and Ashley Simms of the downtown coffee shop Cafecito. Healing from a serious accident two years ago, the pair found comfort in different forms of artistic outlets, as well as the support they received from the Yuma community. This drove Krizay and Simms to help organize and promote First Fridays in downtown Yuma, where they invite artists, musicians, and all other rare birds to come and hang out and display their talents.

The name Tribute of the Muses originates from Greek Mythology, where the nine daughters of Zeus called Muses were considered the inspiration for the arts and sciences. Each Muse possessed a distinct gift among the disciplines of poetry, art, dance, and music.