Woodrow Wilson and the Birth of American Propaganda 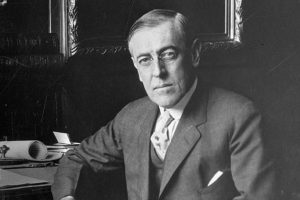 A new book reveals how the government used mass media to spread its message and control what people see and hear.

Manipulating the Masses tells the story of an enduring threat to American democracy that arose out of World War I: the establishment of pervasive, systematic propaganda as an instrument of the state. During the Great War, the federal government exercised unprecedented power to shape the views and attitudes of American citizens. Its agent for this was the Committee on Public Information (CPI), established by President Woodrow Wilson one week after the United States entered the war in April 1917.

Driven by its fiery chief, George Creel, the CPI established a national newspaper, cranked out press releases, and interfaced with the press at all hours of the day. It spread the Wilson administration’s messages through articles, cartoons, books, and advertisements in newspapers and magazines; through feature films and volunteer Four Minute Men who spoke during intermission; through posters plastered on buildings and along highways; and through pamphlets distributed by the millions. It enlisted the nation’s leading progressive journalists, advertising executives, and artists. It harnessed American universities and their professors to create propaganda and add legitimacy to its mission.

Even as Creel insisted that the CPI was a conduit for reliable, fact-based information, the office regularly sanitized news, distorted facts, and played on emotions. Creel extolled transparency but established front organizations. Overseas, the CPI secretly subsidized news organs and bribed journalists. At home, it challenged the loyalty of those who occasionally questioned its tactics. Working closely with federal intelligence agencies eager to sniff out subversives and stifle dissent, the CPI was an accomplice to the Wilson administration’s trampling of civil liberties.

Until now, the full story of the CPI has never been told. John Maxwell Hamilton consulted over 150 archival collections in the United States and Europe to write this revealing history, which shows the shortcuts to open, an honest debate that even well-meaning propagandists take to bend others to their views. Every element of contemporary government propaganda has antecedents in the CPI. It is the ideal vehicle for understanding the rise of propaganda, its methods of operation, and the threat it poses to democracy.

John Maxwell Hamilton is a longtime journalist, public servant, and educator, and the Hopkins P. Breazeale Professor in the Manship School of Mass Communication, Louisiana State University, a Global Scholar at the Woodrow Wilson International Center for Scholars in Washington, D.C., and a senior associate at the Center for Strategic and International Studies.

As a journalist, Hamilton reported in the United States and abroad for the Milwaukee Journal, the Christian Science Monitor, and ABC radio. He was a longtime commentator for MarketPlace, broadcast nationally by Public Radio International. His work has appeared in the New York Times, the Washington Post, Foreign Affairs, and The Nation, among other publications.

In government, Hamilton oversaw nuclear non-proliferation issues for the House Foreign Affairs Committee, served in the State Department during the Carter administration as special assistant to the head of the U.S. foreign aid program in Asia, and managed a World Bank program to educate Americans about economic development. He served in Vietnam as a Marine Corps platoon commander and in Okinawa as a reconnaissance company commander.