Women’s Rights in the 21st Century

“I do not wish them [women] to have power over men, but over themselves.” Mary Wollstonecraft, English philosopher and writer of the eighteenth century.

In this 21st century, rights have become a privilege, not a right per se. To be able to demand that a right is recognized, we must have suffered a grievance, not only be vulnerable to a certain social injustice but literally have suffered damage by an action that violates our rights and the law recognizes that our right has been violated. It is sad sometimes to recognize that laws are strict at the moment of recognizing a right, what I am trying to say with this, that on certain occasions, although the law provides for a right, compliance is hardly carried out either by procedural obstacles or poor execution.

Not long ago, the fight for women’s rights began, which dates back to the 19th century. March is the month to applaud those struggles that began by recognizing women’s rights such as the right to vote, equality, labor, among others. On March 8 of each year, the International Women’s Day is celebrated. Therefore, entering this month of March is always appropriate to touch the issue and applaud all those women who day after day struggle to be recognized for their achievements, for being women and for the simple fact of being human beings with the right to a decent life and justice. There should be no difference between women and men under the law, there should be no superiority of one over the other, and the most important thing is to work as a team. We are all part of the same society, so we must fight for was best for all, working as a team, recognizing injustices and doing something about it.

In the United States of America, the recognition of women’s rights in the Constitution has faced great challenges, several attempts had been made to amend the Constitution so that women’s rights are explicitly recognized, however, they had not been achieved. In 1972, the US Congress passed legislation known as the Equal Rights Amendment, which recognized the equal rights of women and men under the law. However, despite great efforts, campaigns and movements for States to ratify the Amendment, it was not possible to have the minimum needed to ratify it, 38 states, they were three states short to complete the minimum.

The Equal Protection Clause of Amendment 14 prohibits states from denying anyone the same protection under the law, this Amendment can be understood that it recognizes women’s rights, however, women’s rights are not explicitly Guaranteed under it.

On the other hand, Mexico does explicitly recognize the rights of women in its Constitution, mainly in Article 4, which states “the man and the woman are equal under the law”. In addition, there are several federal and state laws that seek to protect women exclusively. However, the problem that exists in Mexico is when we put it into practice there is still disguised equality, where rights are recognized, but they are not practiced or protected properly. 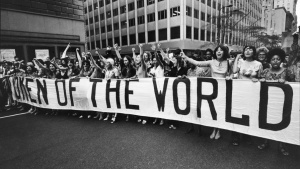 A salary difference between women and men of 30% continues to exist in Mexico (UN data from 2018). The differences in inequality between women and men are mostly seen in the labor and political fields. According to UN data, 7 women are killed every day in Mexico; in the last 25 years there have been more than 35 thousand deaths of Mexican women with presumed homicide; 2 out of 3 Mexican women have experienced some type of violence; 41% of Mexican women have been victims of sexual violence at some stage of their lives; and 15% of women aged 15 and over who have requested work were required to have a certificate of non-pregnancy or were fired for being pregnant.

The work for the recognition of women’s rights has been arduous and constant, but we have fallen short, injustice and violence are still a latent issue in our society, and efforts should not be truncated, we need to continue fighting every day from a society free of inequality and injustice. But it is also important to recognize the great advances that have been made, nowadays a greater number of women do not remain silent and speak up when they faced an injustice. Also, a large number of women and men work every day to make things better, so that one day, injustice in our society no longer exists. We must celebrate that today a greater number of women have been welcomed to politics, to magistrates, to educational institutions and have been opened to assume careers dominated by men such as mathematics, science and technology.