Women Are Improving the Beer Industry of Mexico 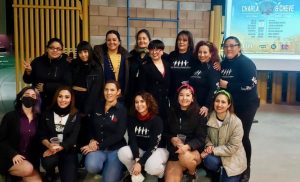 A group of women is showing the world how they are adding value to the industry and changing the game of the beer business in Mexico.

Women Tasters of Beer in Mexico (MCCM) is a non-profit group, founded by Yadira Espinoza; Katy Pedrín, in the area of ​​design, Kenya Vidal and Karla Mora also as founding members, in Baja California, which for almost a decade has brought together 2,900 women from Mexico and other countries, whose activities are related to local craft beer.

They emerged with very clear objectives, which have been successfully achieved under guidelines, such as promoting beer culture; professionalization of the women’s sector in the beer industry; promotion to women who wish to venture into the brewing field; support network for brewers, tasters, and women related to the union; as well as promotion of moderate consumption of alcoholic beverages.

For 4 years they have been granted 5 scholarships to acquire the Beer Taster certificate, by Cicerone, to contribute to the professionalization of our coordinators.

During the actions of legislation of the artisanal production in Baja California, they had presence and support to the sector.

They have shown during these years that they can carry out events, such as tastings, tastings-pairing, beer yoga, study circles, interviews with brewers, visits to breweries, drink & draw, beer school, posadas with cause, in the different cities where there is a coordinator.

It is worth mentioning that MCCM has had a presence at Cerveza México since 2015, guiding visitors through simple steps on how to taste a beer, complementing the festival experience.

In addition to the above, they organized and developed the first women’s beer cup in Mexico, called “GODDESSES OF BEER”; likewise, since 2016 they institutionalized and celebrate the “DAY OF THE BEER”, which is celebrated in February.

This group has participated in the three editions of Impetuosa, as well as in other collaborations, to mention one, on March 16th they will participate in a collaboration with Cervecería Transpeninsular, where all proceeds will be donated to associations that deal with cancer.

Likewise, in this edition of the Ensenada Beer Fest, they will be guiding the attendees through scheduled tastings of the participating breweries, on the 18th and 19th.

On the 17th, MCCM celebrates 10 years of promoting beer culture and as part of our celebration they will give a conference at the Ensenada Beer Fest Congress, the topic to be discussed is “Outstanding Women of the Beer Industry”, a timeline of the most outstanding brewers and tasters in the brewing industry in the last 27 years.