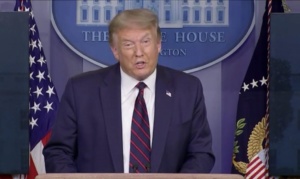 The recent surge of COVID-19 cases and the lack of information has forced the President to resume the Coronavirus Task Force briefings starting this week.

President Donald Trump said that he will resume holding coronavirus press briefings at the White House as a sharp rise in cases across the nation coincides with his declining poll numbers.

“And so I think what we’re going to do it, I’ll get involved and we’ll start doing briefings, whether it’s this afternoon or tomorrow, probably tomorrow, and I’ll do briefings,” Trump said.

The briefings from the coronavirus task force, once a near-daily occurrence, had been largely scrapped for nearly three months.

Trump urged Americans to wear a mask during the Tuesday press conference.

“Whether you like the mask or not, they have an impact,” Trump said.

President Trump said that while there is a surge in cases, they are looking at it very closely.

“Some areas of the country doing very well, others did less well. It will probably, unfortunately, get worse before it gets better. I don’t like saying that, but that’s the way it is,” Trump said.