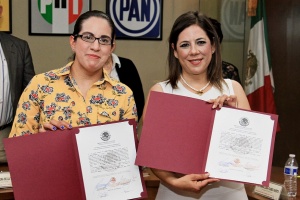 MEXICALI, BAJA CALIFORNIA.- Gina Andrea Cruz Blackledge received the certificate of majority as Senator-elect, from the members of the Local Council of the INE Executive Local Board, and she committed to work for the entity and represent Baja California as Baja Californians deserve.

She mentioned that one of the main proposals made by the Coalición Por México al Frente (PAN-PRD-MC), was to work to reduce taxes at the border, which currently stands at 16%, through an initiative to reduce it to 8%, which will be presented in the first week when she assumes her position as senator of the Republic for Baja California.

“From the Senate of the Republic we will be doing what we committed ourselves to do,” she said.

The senator-elect thanked the electoral authorities, such as President María Luisa Flores Huerta, the counselors, the secretary, representatives of the Party, for the excellent work they did on election day, in which Baja California showed signs of the civility that exists.

She also thanked the parties that gave her the opportunity to participate, such as PAN, Movimiento Ciudadano and the PRD, thanks that she extended to her family, friends, work team and her running mate, Jorge Ramos Hernández.

“I thank Baja Californians who have given us the opportunity to represent them in the Senate of the Republic, and who can be sure that we will do a job with responsibility, and above all, we will put the name of our great State, Baja California, very high. “, Said Gina Cruz.