Breaking News
Home / BUSINESS / We will have Renegotiation of NAFTA

We will have Renegotiation of NAFTA

By: Alejandro Díaz-Bautista, Phd in Economics

“Economic analysis tells us that we will have a renegotiation of NAFTA,” said Dr. Alejandro Díaz-Bautista, an economist, national researcher at Conacyt, as well as a research professor at the Northern Border College (Colef).

US and Mexican businessmen have a common ground over the renegotiation that President Donald Trump wants to make of the North American Free Trade Agreement (NAFTA): that the treaty does not end and that its modifications don’t cause harm to any of the trading partners.

For weeks, we have heard Mexican businessmen ask that in a renegotiation of NAFTA or free trade it should be recognized that the treaty has equally benefited all member countries of Mexico, the United States and Canada.

If President Trump’s administration wants to renegotiate NAFTA in good faith, the 23-year-old agreement could be improved in a number of ways. To begin with, NAFTA could be expanded to cover issues that did not exist when it was originally negotiated, such as e-commerce and data localization. Labor protections could also be improved by guaranteeing the rights of workers to form independent trade unions, prohibiting child labor and strengthening law enforcement against traffickers. 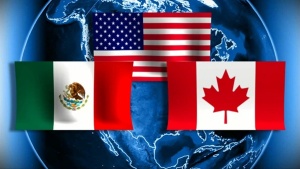 NAFTA negotiators could push for environmental protections such as measures to safeguard the oceans and provisions to enforce the ban on illegal logging and trade in threatened species. These additional protections could be backed by a credible dispute settlement process and threats of trade sanctions as credible as those underpinning the resolution of ordinary mercantile disputes.

In business commerce, NAFTA allowed Mexico to multiply its trade with the US and Canada almost six-fold. In 1993 the exchange of goods of Mexico with Canadians and Americans added 90,944 million dollars (86,286 million euros).

The United States is Mexico’s main trading partner with 79 percent of the total trade of Mexican economy.