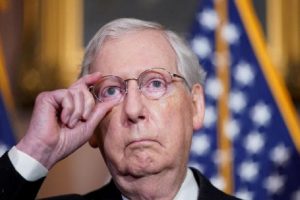 President Donald Trump’s push for $2,000 COVID-19 relief checks now rests with the Senate after the House voted overwhelmingly to meet the president’s demand to increase the $600 stipends, but Republicans have shown little interest in boosting spending.

The outcome was uncertain heading into Tuesday’s session. Senate Majority Leader Mitch McConnell declined to publicly address how he plans to handle the issue. But Democrats, sharing a rare priority with Trump, have seized on the opportunity to force Republicans into a difficult vote of either backing or defying the outgoing president.

The pressure is mounting on the Republican-led Senate to follow the House, which voted overwhelmingly on Monday to meet the president’s demand to increase the checks from $600 as the virus crisis worsens. A growing number of Republicans, including two senators in runoff elections on Jan. 5 in Georgia, have said they will support the larger amount. But most GOP senators oppose more spending, even if they are also wary of bucking Trump.

The direct payments are worth $600 for individuals whose gross adjusted income was under $75,000 in 2019 and couples who earned under $150,000 — the same income requirements as the first round of checks. The amount of the check then decreases by $5 for every $100 of income above those thresholds, phasing out completely at $87,000 for individuals and $174,000 for couples.

Dependents under age 17 are also eligible for $600 checks, and there’s no cap on the number a household can receive. So if a single person earned $50,000 in 2019 and has four children under 17, the individual will be eligible for a $3,000 payment.

The bill also extends the eviction moratorium for another month.