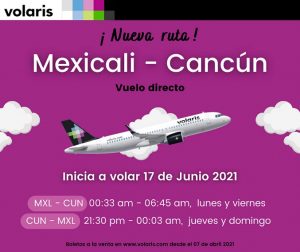 Volaris, the ultra-low-cost Mexican airline that operates in Mexico, the United States and Central America, announced the opening of its new exclusive Cancun-Mexicali route, which will begin operations on June 17.

In the midst of the new normal, Volaris reinforces its commitment to connectivity in Mexico to support the safe reactivation of the industry, especially in the domestic market, incorporating into its route network an option that is positioned as the first to connect Mexicali with a destination entertainment.

This route operated exclusively by Volaris seeks to take passengers from the north to the southeast of the country, in a journey that takes 54 hours by bus.

“Although our main market is those who visit family and friends, we do not neglect passengers looking for recreational destinations where they can travel with all biosecurity measures. Mexicali is a strategic city for our route network and, in the same way, Cancun represents a very important connection center. Hence the decision to operate the first leisure route in the northern city” commented Miguel Aguiñiga, director of market development and distribution at Volaris.

For his part, the Secretary of Sustainable Economy and Tourism; Mario Escobedo Carignan, stated that “thanks to this new Cancun-Mexicali route, Baja California continues to be positioned as one of the states with the greatest connectivity in the country, as a result of the great potential that our entity represents in economic and tourist development at the level national, with which we continue to promote the growth of several emerging segments in the State, such as Adventure and Nature Tourism, Craft Beer and experiences around the original communities of Baja California.”

With 98 scheduled flights per week, Volaris is the largest airline – and the only low-cost airline – that connects Mexicali with recreational destinations; since 2007 it has carried almost 6 million passengers.  For its part, in Cancun, the company began operations in 2006 and has transported almost 23 million customers.

Darío Flota, director of the Tourism Promotion Council of Quintana Roo mentioned that “it’s great news for the Mexican Caribbean to know that Volaris, Quintana Roo’s ally in tourist recovery, establishes a direct connection between Mexicali and Cancun to bring this great market in the north of the country with the destinations of our State. We trust that it will also be a very successful route.”

This route will support economic reactivation through safe travel under the airline’s strict Biosafety Protocol, which is aligned with the recommendations issued by the International Air Transport Association (IATA), the European Aviation Safety Agency (EASA).  )) and the World Health Organization (WHO).

Those interested in acquiring tickets for this new route will be able to do so starting today, Thursday, April 8, from $899 pesos one-way flight, in the following itineraries: