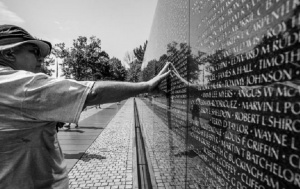 “To ensure the sacrifices of the 9 million heroes who served during this difficult chapter of our country’s history are remembered for generations to come, I signed into law the Vietnam War Veterans Recognition Act of 2017, designating March 29 of each year as National Vietnam War Veterans Day. Throughout this Commemoration of the 50th Anniversary of the Vietnam War, and every March 29 thereafter, we will honor all those who answered our Nation’s call to duty. We vow to never again confuse personal disapproval of war with prejudice against those who honorably wear the uniform of our Armed Forces. With conviction, our Nation pledges our enduring respect, our continuing care, and our everlasting commitment to all Vietnam veterans,” stated the President in the proclamation.

This week, Naval Air Facility El Centro will post stories and information about the Navy’s involvement during the Vietnam War on its Facebook page, www.facebook.com/NAFEC.

For more information on the U.S. Navy in Vietnam, please visit the Navy History and Heritage Command’s website, https://www.history.navy.mil/browse-by-topic/commemorations-toolkits/Vietnam-War-Veterans-Day/digital-resources.html and the 50th anniversary commemoration at http://www.vietnamwar50th.com.