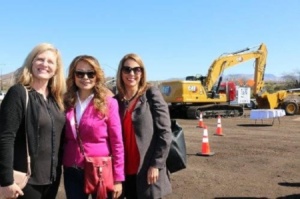 State Route 189, commonly known as Mariposa Road, is a 3.75-mile highway in Nogales, Arizona and is maintained by the Arizona Department of Transportation. The improvements to State Route 189 will be between the Mariposa Port of Entry and Grand Avenue, this will accommodate the increasing volume of traffic in a safe and efficient manner.

This project includes the widening of the roadway, intersection improvements, construction of a roundabout, new traffic signals, and signs, and two flyover ramps connecting State Route 189 with Interstate 19.

“It is a pleasure represent the City of San Luis in important events like the Ground Breaking Ceremony for State Route 189 and to see the support the entire state gives for projects that impact border communities,” stated Vice Mayor Maria Cecilia Cruz. “With 152.4 million dollars being invested in San Luis Port of Entry and the construction of SR189 it is great to see the State and Federal agencies working alongside border communities for their betterment,” she added.