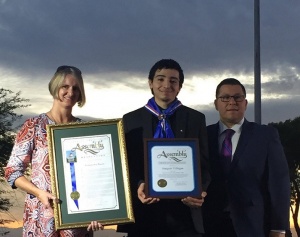 Every November 11th, Americans honor those that serve in the United States Armed Forces. The Imperial Valley celebrated Veteran’s Day with many celebrations through the valley.

On November 10, at the Imperial Valley Veterans Memorial at the Imperial County Airport, the community came together to celebrate veterans and celebrate the accomplishment of Joaquin Villegas who successfully gathered support to construct a  veterans monumet.

Joaquin was a Boy Scout growing up and during a Veterans Day celebration his troop participated, he was thanked by a veteran who had tears in his eyes and that inspired him to do his Eagle Scout project by doing a veterans monument. An ambitious project like this one needed a lot of monetary support and was able to get funds thanks to the community and county government to make it happen.

Also during the event, State Assemblymember Eduardo Garcia honored 56th Assembly District’s 2017 Veteran of the Year recipient El Centro resident, Kimberly Vincent. Vincent was selected for her lifelong commitment to ensuring veterans and their families receive the dignity and services that they have earned as well as her overall body of community work and advocacy efforts.

“It is a privilege to recognize United States Navy Veteran, Kim Vincent of El Centro. I highly commend her valor and distinguished service in defense of our great nation, as well as her significant contributions within the community,” stated Assemblymember Garcia. “Mrs. Vincent is a veteran’s resource aficionado who has been hailed as the unofficial first point of contact for veteran services in Imperial County. I look forward to celebrating the achievements of this true patriot and exemplary citizen.”

-Editorial It was an evening that combined women, wine, paint, and good music as the …