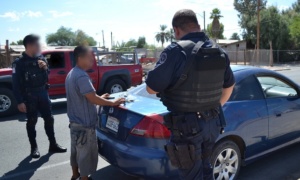 MEXICALI, BC- MONDAY, June 24, 2019.- Vehicle theft seriously affects the patrimony of citizens, so at the beginning of this year it was one of the objectives to attack as part of the strategies proposed by the authorities within the Coordination Group for the Construction of Peace in Baja California, which resulted in a reduction of 19% in the first 5 months of the year.

The Secretary of Public Safety of the State, José Fernando Sánchez González, said that this strategy involves the municipal police, preventive, ministerial, Mexican Army and the Secretary of the Navy, where special operations were established in the 400 communities identified as a priority.

He specified that from January to May of 2018 there were 7 thousand 538 robberies while in the same period of 2019 there were 6 thousand 85, which resulted in a reduction of incidence that, although it is not enough, will redouble efforts to follow the decrease in this illicit.

By municipality, vehicle theft had an important decrease in Mexicali of 34% and in Tijuana of 20%, which indicates that the operations are effective, although there is still more work to be done, for which the citizens are encouraged to join the campaign through prevention.

Sanchez Gonzalez said that on the State Preventive Police’s (PEP) part this year, 34 gangs were dismantled dedicated to vehicle theft in Baja California and 180 vehicles reported were recovered.

“The fight against crime and insecurity is a permanent responsibility and a daily task as a whole, where thanks to the participation of various sectors of society it has allowed, during these six years of work, the consolidation of strategies embodied in the governing axes of the state administration, “said the head of the SSPE.