Vaccine Ready to Roll out in Mexico 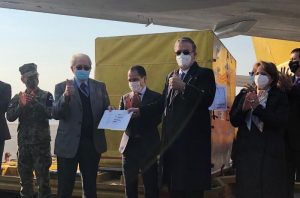 The first vaccines have been given to the frontline workers in Mexico who have worked tirelessly these last nine months against the COVID-19 pandemic.

Mexico City nurse Maria Ramírez became the first person in Latin America to get vaccinated for COVID-19 on Thursday. The Mexican government received a shipment of 3,000 doses of the Pfizer-BioNTech vaccine on Wednesday. The government planned to vaccinate health workers in Mexico City and other medical personnel in other cities throughout the nation. As of Thursday, Mexico generated 120,311 coronavirus deaths – the fourth-most in the globe.

In the morning press conference headed by President Andrés Manuel López Obrador, the Secretary of Foreign Affairs, Marcelo Ebrard Casaubon, spoke about the agreements the country has with pharmaceutical companies that have the most advanced clinical developments against COVID-19 and reported on the operation to calibrate the storage, distribution and application measures of the Pfizer-BioNTech vaccine, following the National Vaccination Plan designed by the Government of Mexico.

During his speech, Foreign Minister Ebrard said that Mexico is the first country in Latin America with access to the vaccine and recalled that we have an agreement with Pfizer to gradually acquire up to 34 million 400 thousand vaccines, of which the first three thousand doses have arrived. These were required by the Health sector to test the process of training of personnel, refrigeration, distribution, and application of the vaccine, for which he emphasized that “we cannot have inventory stocks, because it is ultra-frozen, or have the boxes of  intermediate distribution -which are boxes with dry ice- too long, everything has to be chronometrically organized.”

Likewise, the Secretary of Foreign Relations explained that next week the next 50 thousand doses will reach the national territory and so on, until completing one million 420 thousand 575, between December 2020 and January 2021, a sufficient number for workers that will be the first to be inoculated because they are in the first line of care for the pandemic.

Foreign Minister Ebrard reviewed the status of the agreements that Mexico has with the vaccine projects against COVID-19.

Regarding the AstraZeneca-University of Oxford vaccine project, he indicates that it is expected to obtain authorization for emergency use in Europe at the end of January 2021 and recalled that Mexico pre-purchased 77.4 million doses to be packaged in our country.

Regarding the development of CanSino Biologics, he said that this company has already submitted its file to the analysis of the Federal Commission for the Protection against Sanitary Risks (Cofepris) and during January it will present the first results of its phase III to request authorization for use of emergency.

Regarding the multilateral portfolio of Covax vaccines, he reported that on December 18, the announced mechanism that will be able to offer participants doses for 3% of its population during the first quarter of 2021 and recalled that Mexico pre-purchased 51.5 million doses.

Regarding phases III to be implemented in our country, Secretary Ebrard indicated that CanSino Biologics began this phase on October 29 and has just over eight thousand volunteers to date; he said that Janssen, from the United States, has been underway since November 29, with an advance of 400 volunteers out of a total of two thousand;  Novavax, from the United States, and Curevac, from Germany, are in the authorization phase by Cofepris;  and finally communicated that the Russian vaccine Sputnik V has already submitted its request to start its phase III on December 9 before Cofepris.

The Ministry of Foreign Relations reaffirms its commitment to contribute to universal, timely, and equitable access to the vaccine against COVID-19.