USCIS to Welcome More Than 34,000 New Citizens in Celebration of Constitution Day and Citizenship Day 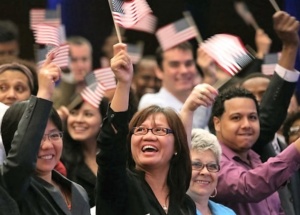 WASHINGTON—USCIS announced today that it will celebrate Constitution Day and Citizenship Day by welcoming nearly 34,300 new U.S. citizens during 316 naturalization ceremonies across the nation between Sept. 13 and 23.

“Two hundred and thirty-two years ago, our great country adopted the United States Constitution, and as we celebrate Constitution Week, it is important to underscore the significance of citizens’ responsibilities for protecting and defending the Constitution,” said Acting Director Cuccinelli. “These nearly 34,300 new U.S. citizens followed the law on their path to naturalization and now call the U.S. home. I can think of no better way to celebrate Constitution Week than to welcome thousands of new U.S. citizens who have assimilated, made a commitment to our great country, and have vowed to support the Constitution.”

This time of year serves as an opportunity to celebrate the connection between the Constitution and citizenship and reflect on the meaning of becoming a citizen of the United States. USCIS welcomes approximately 650,000 to 750,000 citizens each year during naturalization ceremonies across the United States and around the world. In fiscal year 2018, USCIS naturalized more than 756,000 people, a five-year high in new oaths of citizenship.

To help applicants prepare to become U.S. citizens, USCIS provides study materials and resources available through the Citizenship Resource Center. In addition, the only official USCIS Civics Test application, USCIS: Civics Test Study Tools, is a mobile app that challenges users’ civic knowledge and is currently available for download in the Google Play and iTunes stores.

Following each naturalization ceremony, USCIS encourages new U.S. citizens and their families and friends to share their naturalization photos on social media using the hashtags #newUScitizen, #ConstitutionWeek, and #WethePeople.