US will send one million vaccines to Mexico 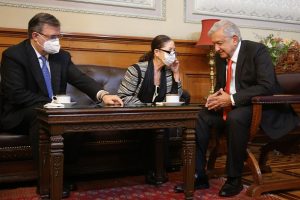 MEXICO CITY- Mexican President Andrés Manuel López Obrador announced that the US will send one million vaccines from the Johnson & Johnson company to Mexico, which is a single application. This is part of a total donation of 80 million vaccines to countries around the world in the coming months.

On the Mexican president’s social network, he shared that US Vice President Kamala Harris informed them of this decision before the official announcement. Thus, the US government reported that this donation of 80 million vaccines against COVID-19 will be distributed by 75% through the Covax initiative in different regions such as Latin America.

The U.S. President stressed: “We share these doses, not to obtain favors or achieve concessions. We share these vaccines to save lives and lead the world to end the pandemic with the power of our example and our values.”

It was reported that 6 million vaccines will be destined for South and Central America, 7 million for Asia, 5 million for Africa, and more than 6 million for partner countries of the United States.

On the other hand, it was reported that yesterday the immunization record was broken in Mexico with 1 million doses applied.