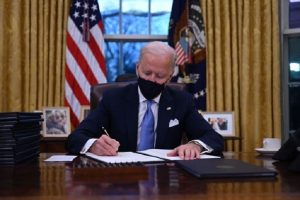 Secretary of State Tony Blinken announced Friday that the United States formally rejoined the Paris climate agreement, arguing it will “help us all avoid catastrophic planetary warming” and “build resilience” around the world.

The Paris Agreement is a legally binding international treaty on climate change. It was adopted by 196 Parties at COP 21 in Paris, on 12 December 2015 and entered into force on 4 November 2016.

Its goal is to limit global warming to well below 2, preferably to 1.5 degrees Celsius, compared to pre-industrial levels.

To achieve this long-term temperature goal, countries aim to reach global peaking of greenhouse gas emissions as soon as possible to achieve a climate-neutral world by mid-century.

The Paris Agreement is a landmark in the multilateral climate change process because, for the first time, a binding agreement brings all nations into a common cause to undertake ambitious efforts to combat climate change and adapt to its effects.

“The United States and the world face a profound climate crisis. We have a narrow moment to pursue action at home and abroad in order to avoid the most catastrophic impacts of that crisis and to seize the opportunity that tackling climate change presents,” Biden said, “Domestic action must go hand in hand with United States international leadership, aimed at significantly enhancing global action.  Together, we must listen to science and meet the moment.”

United States international engagement to address climate change — which has become a climate crisis — is more necessary and urgent than ever, Biden said.

“The scientific community has made clear that the scale and speed of necessary action is greater than previously believed.  There is little time left to avoid setting the world on a dangerous, potentially catastrophic, climate trajectory.  Responding to the climate crisis will require both significant short-term global reductions in greenhouse gas emissions and net-zero global emissions by mid-century or before,” Biden added. “It is the policy of my Administration that climate considerations shall be an essential element of United States foreign policy and national security. The United States will work with other countries and partners, both bilaterally and multilaterally, to put the world on a sustainable climate pathway. The United States will also move quickly to build resilience, both at home and abroad, against the impacts of climate change that are already manifest and will continue to intensify according to current trajectories.”