BBC News: Candidates bidding for their party’s nomination in the US presidential election face their biggest test yet in the “Super Tuesday” primary polls.

Eleven states cast votes for candidates from either the Republican or Democratic parties or both in a contest seen as make-or-break for the hopefuls.

Contests stretch from Vermont in the east to Texas and Georgia in the south.

Donald Trump leads the Republican field and Hillary Clinton is ahead in the Democratic race.

There have been earlier votes in four states.

Senator Ted Cruz cannot afford to lose to Mr Trump in Texas, Mr Cruz’s home state, while a reverse for Mr Trump in Massachusetts, with its moderate voters, could break the property tycoon’s nationwide momentum.

Mrs Clinton is hoping to build on her weekend victory in South Carolina, where she polled heavily among African-Americans, to restore her political fortunes after a bruising defeat in New Hampshire to Bernie Sanders, her self-styled democratic socialist rival.

On 8 November, America is due to elect a successor to Barack Obama, a Democratic president standing down after two terms in office which have seen the Republicans take control of both houses of Congress. 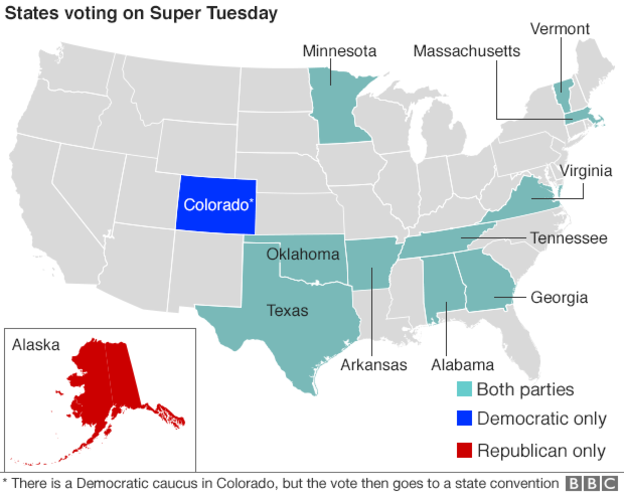 At a rally in Ohio on Tuesday, he criticised Mrs Clinton, saying she “does not have the strength or the stamina to be president”.

The colourful campaign of the billionaire, who won three of the four early voting states, has divided Republicans.

On the eve of the polls, Nebraska Senator Ben Sasse became the highest-ranked elected party member to come out and say he would not back him for president.

He said he was “frustrated and saddened” and would look for a third option if Mr Trump won the Republican nomination. 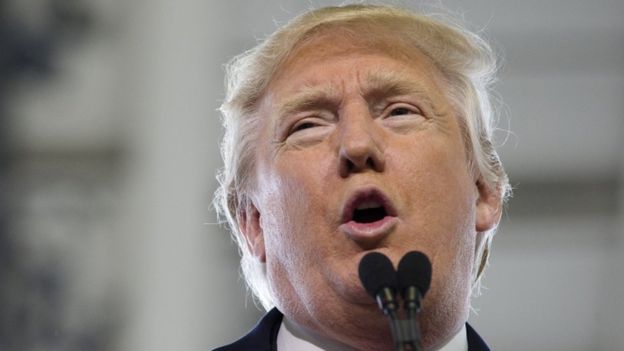 As he voted in Texas, Mr Cruz turned his fire on Mr Trump: “The only campaign that is in a position to beat Donald Trump on Super Tuesday is our campaign. 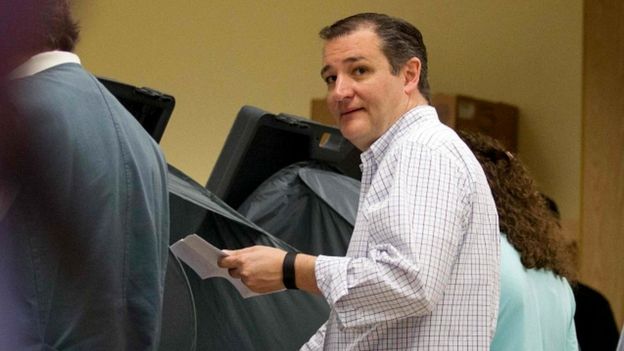 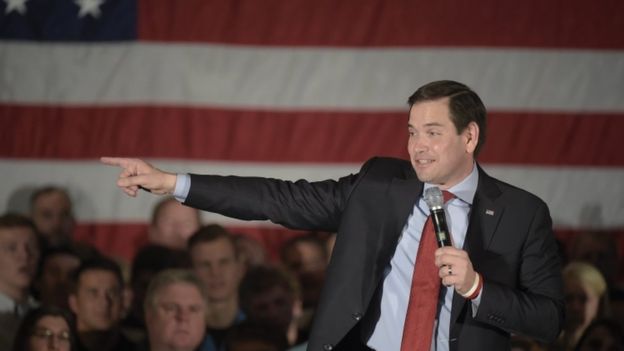 Marco Rubio, the third-placed Republican contender after Mr Trump and Mr Cruz, is hoping to stay competitive, gambling on a win in his home state of Florida on 15 March.

Mr Trump’s commitment to several controversial immigration pledges, including the wholesale deportation of illegal immigrants and construction of a wall along the US-Mexico border, was called into question on Monday after reports describing an off-the-record conversation with the New York Times editorial board.

Mr Cruz, Mr Rubio and former Republican candidate Mitt Romney have called on Mr Trump to authorise the release of the transcript, in which Mr Trump reportedly says his hardline immigration policies would be flexible if he were elected.

However, they were more divided on the deportation of illegal immigrants overall. Large numbers also expressed negative feelings towards federal government, AP reports.

Mr Trump has also faced heavy criticism over his failure to disavow David Duke, a leader of the white supremacist Ku Klux Klan, who has endorsed the Republican candidate.

Protesters, including some from the Black Lives Matter movement, repeatedly disrupted a Trump rally in Radford, Virginia, on Monday after his refusal to condemn Mr Duke.

On Tuesday, Mr Trump said he had on several occasions in the past disavowed Mr Duke.

Democrats are voting in Alabama, Arkansas, Georgia, Massachusetts, Oklahoma, Tennessee, Texas, Vermont, Virginia and Minnesota, as well as in the US territory of American Samoa.

Democrats abroad will also submit their votes. There is also a caucus in Colorado, but the vote then goes to a state convention. 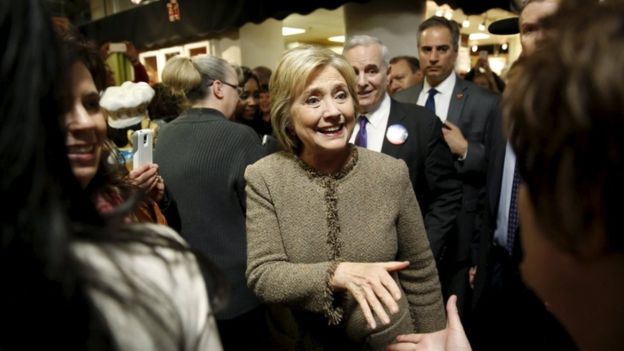 Mrs Clinton is eyeing black voters in places like Alabama, Georgia and Virginia after taking eight out of 10 black votes in South Carolina.

On the campaign trail in Minneapolis on Tuesday, she accused her Republican rivals of “running their campaigns based on insults. It’s turned into a kind of one-upmanship on insulting”.

Bernie Sanders voted early in his home state of Vermont.

He told reporters that if turnout was high “we are going to do well. If not, we’re probably going to be struggling”.

But he pledged: “This is a campaign that is going to the Philadelphia convention in July.”

Follow the primaries race with the delegate tracker, provided by the Associated Press (AP)

2016-03-02
Admin
Share
Previous The California Innocence Project by the California Western School of Law, Its Roots, History and Work.
Next Climate change takes from the poor, gives to the rich, study finds