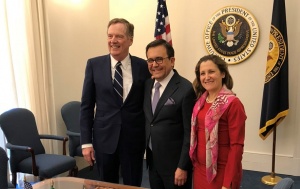 Bloomberg says the Trump Administration will release the text of a bilateral trade agreement with Mexico on Friday. While the text will likely exclude Canada, it will leave open the possibility of Canada joining the agreement later. U.S. trade law says the text of the deal has to be published 60 days before it can be signed. U.S. Trade Representative Robert Lighthizer says the U.S. is moving forward with the Mexican agreement so the current president can sign it before he leaves office on December 1st. Canada is currently negotiating with the U.S. to join the pact but there are still several issues the two countries haven’t reached an agreement on.

Lighthizer says the U.S. doesn’t want to risk having to renegotiate the pact with the incoming president of Mexico. “It wouldn’t be fair to the people involved, certainly U.S. workers, farmers, and ranchers, to start a new negotiation with a new president of Mexico,” says Lighthizer. Trade talks will continue with Canada, even after the deadline passes on Sunday. Lighthizer says the two countries may even carve out a separate deal.

Three state representatives are asking Lighthizer to slow down the pace of the North American Free Trade Agreement negotiations. They feel that gives the U.S. the best opportunity to come to a fair agreement on dairy exports. Representatives from Wisconsin, Washington, and New York all represent states that need open-market access to Canada in order to support their dairy exports. MilkBusiness.com says there hasn’t been any substantial progress in accessing the Canadian dairy market or dismantling their Class 7 pricing system. Wisconsin and New York dairy farmers were hit the hardest when Canada implemented its Class 7 milk pricing system in the spring of 2017.

As dairy prices across the U.S. remain low, the three representatives say their farmers are depending on access to the Canadian market in order to sell their “world-class dairy products.” In their statement, the legislators say, “We urge Ambassador Lighthizer to stop rushing the NAFTA negotiation process and focus on getting the best deal with both Canada and Mexico.” They add the arbitrary deadlines the administration says it faces are its own. “We should not be rushed to complete NAFTA negotiations at the expense of a good outcome,” they say.