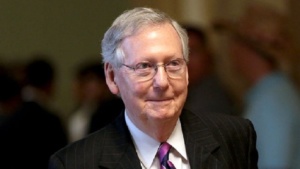 “We have an agreement in principle on the shape of this package. It is the framework that will enable Congress to make law and deliver more relief to the American people that is tailored precisely to this phase of the crisis,” McConnell said.

The Senate Majority has assembled the framework for CARES 2, but the administration has asked for more time to review the details. The CARES 2 Act will have three pillars of focus: kids, jobs, and healthcare. New direct payments and PPP loans will be a part of the bill. CARES 2 will include $100 billion in funding for schools and colleges.

“We need to get Americans back to work and school while continuing to fight for our nation’s health. That is what CARES 2 is designed to do. Our proposal will not waste the American people’s time with go-nowhere socialist fantasies. We aren’t choreographing political stunts or teeing up the same old partisan trench warfare,” he said.

McConnell and Trump agree that kids need to go back to school.

“We need as many K-12 schools, colleges, and universities as possible to be safely welcoming students this fall. So Chairman Alexander, Chairman Shelby, and Chairman Blunt are finalizing an ambitious package of funding and policy to help our schools reopen.

“They will layout a reopening-related funding package for schools and universities north of $100 billion. That’s more money than House Democrats proposed for a similar fund.

“And there will be several important policies to help childcare providers, grant new flexibility to elementary and secondary schools, and more.”