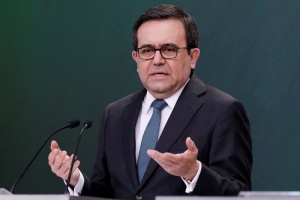 By: Sharay Angulo and Timothy Aeppel

WASHINGTON (Reuters) – U.S.-Mexico talks to craft a deal on new auto industry rules under the NAFTA trade pact are poised to continue into next week, Mexico’s economy minister said on Thursday, as friction persists over the threat of more restrictive U.S. import rules.

Trump has threatened to withdraw from the 24-year-old trade pact between the United States, Mexico and Canada if it is not reworked to the advantage of U.S. workers.

He hopes to reduce the U.S. trade deficit with lower-cost Mexico and claw back jobs, particularly in the auto industry.

“We’re on a path that can take us into the weekend and next week,” Mexican Economy Minister Ildefonso Guajardo told reporters as he entered the offices of U.S. Trade Representative Robert Lighthizer in Washington for talks on Thursday afternoon.

Mexico and the United States have said they were close to resolving remaining bilateral issues in the revamp of the trade pact. However, a day earlier Guajardo had said the two sides might be able to reach agreement in “hours.”

The tone has become more cautious since then.

“We are well advanced (but) not there yet,” said Guajardo.

The talks could drag on due to unresolved sticking points, such as rules of origin for autos, meant to bring more production to the region, a U.S. sunset proposal that could kill NAFTA after five years and dispute resolution mechanisms.

Canada has been waiting for the Mexican and U.S. teams to reach common ground before rejoining the negotiations.

That demand has been causing friction at the latest U.S.-Mexico talks, according to an industry source familiar with the process, who spoke on condition of anonymity.

Matt Blunt, president of the American Automotive Policy Council, also said there had been discussion of imported products that do not comply with new NAFTA requirements.

“We’ve not really been making any recommendations to the U.S. government on that topic,” he told reporters on a conference call.

Blunt said that stronger automotive content rules emerging from NAFTA negotiations are expected to keep North America competitive as a production base, and that he was “very encouraged” by the direction of U.S-Mexico talks.

The threat of 25 percent tariffs could discourage new automotive investment in Mexico to serve the U.S. market.

A Mexican source said that Mexico would not accept tougher U.S. import rules under a new NAFTA than current ones that prevail under the United States’ World Trade Organization tariff commitments, which foresee a 2.5 percent duty for light vehicles.

U.S. and Mexican officials say they will push for a deal that could open the door for Canada to return.

“We need to get an engagement with Canada and the only way that can happen is if we continue through the weekend and into next week,” said Guajardo.

Canada’s government reiterated on Thursday that it would need to be satisfied with any new rules of origin.

Canadian Foreign Minister Chrystia Freeland told reporters: “Canada clearly has an interest in how those rules are updated and we clearly will need to look at and agree to any final conclusion.”

Canada’s Prime Minister Justin Trudeau later said Ottawa was in regular contact with its NAFTA partners and was encouraged by the optimism expressed by the United States and Mexico. “We’re working to achieve a good deal, not just any deal,” he said.