U.S. Government Could Give Stimulus Money to Americans 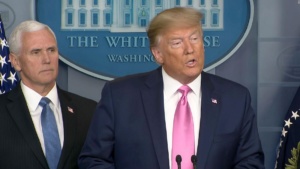 The White House is talking to congressional leaders of both parties about a massive stimulus package to blunt the impact of the coronavirus crisis. The proposal includes sending payments directly to Americans totaling $500 billion, broken up into two tranches.

President Donald Trump said in the daily press conference briefing that he supports the stimulus package that will help Americans that had their jobs affected by this crisis.

“For the people that are now out of work because of the important and necessary containment policies, for instance, the shutting down of hotels, bars, and restaurants, the money will soon be coming to you,” the president wrote on Twitter. “The onslaught of the Chinese Virus is not your fault! Will be stronger than ever!”

Senate Republicans on Thursday formally rolled out a $1 trillion economic stimulus plan intended to deliver critical aid to US businesses and the American public.

It’s a move that sets the stage for negotiations to begin in earnest between Republicans and Democrats in an effort to reach a bipartisan deal to help an economy hit hard by the rapid spread of the novel coronavirus.