Fully vaccinated Americans can return to life without masks 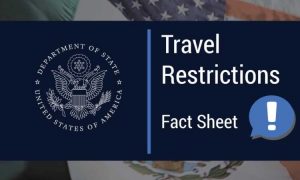 The United States Embassy has published a travel warning for Mexicali and the Mexicali Valley due to the recent criminal events and attempted kidnappings.

The U.S. Embassy stated on their website that travelers should avoid Mexicali and the Sonora area.

“Travelers should exercise increased caution when traveling in and around Mexicali, the Mexicali Valley, and the western part of the state of Sonora due to the possibility for heightened violence between rival cartel factions. Members of the embassy community have been advised to avoid the Mexicali area until further notice,” the Embassy said.

The Embassy advised U.S. Travelers to review Mexico Country Information and Travel Advisory. Remain vigilant during the daylight hours and avoid travel at night. Monitor the local news for updates, follow directions from local officials, and in case of emergency call 911

“Keep your friends and loved ones up to date on your whereabouts – via phone, text, and social media – and let them know you are safe, when possible. If you are a U.S. citizen traveling to or residing in Mexico, enroll in the Smart Traveler Enrollment Program to receive safety messages and other travel information,” The Embassy advised.

The U.S. government has limited ability to provide emergency services to U.S. citizens in many areas of Mexico, as travel by U.S. government employees to certain areas is prohibited or significantly restricted.

U.S. government employees may not travel between cities after dark, may not hail taxis on the street, and must rely on dispatched vehicles, including from app-based services like Uber or from regulated taxi stands.

U.S. government employees may not drive from the U.S.-Mexico border to or from the interior parts of Mexico, with the exception of daytime travel within Baja California, between Nogales and Hermosillo on Mexican Federal Highway 15D, and between Nuevo Laredo and Monterrey on Highway 85D (during daylight hours and with prior Consulate authorization only).

CETYS Will Offer a Certificate for Teenagers in Emotional Intelligence