A new 30-foot wall stands between Calexico and Mexicali that will help enforce border security, something the Department of Homeland Security Secretary Kirstjen M. Nielsen said it will help reduce illegal immigration.

“Walls work. That’s not my opinion, that’s not a tagline, it’s not a political statement, it’s a fact,” Nielsen said in a press conference in Calexico held on Oct. 26 saying that the border wall system has been proven to be successful in places like Arizona, El Paso, and San Diego. “We are confident that this new 30-foot fence can drive the number of apprehensions down even further,”

The border wall began construction in February and officially ended construction on Oct. 9. Vice-President Mike Pence visited Calexico to see the construction on April 30. The fence was last replaced in the 1990s and stopped meeting the operational demands and the flow of illegal immigration increased. 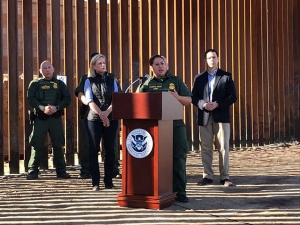 Nielsen said the El Centro Sector and the Calexico have the highest number of illegal crossings, highest in attacks on agents, and because of its proximity to the Gran Plaza Outlets, it’s a public risk, she said.

“We are finally providing our agenda the infrastructure it needs to be successful,” Nielsen said.

“My number one priority is the safety of my officers so to me this 30-foot fence is important because in this area there have been attacks and violence against my officers”, Chavez said.

In regards to the Central American caravan, Chavez said they are preparing themselves and have special units that will back them up and monitor people that want to attack the officers.

“If they want to come in order, we will treat them like anyone that wants to enter this country, however, if they come in an aggressive manner then the reaction of our officers will elevate because they have to defend themselves and others first,” Chavez said.