U.S. and Mexico Agree On Border Restrictions Due to COVID-19 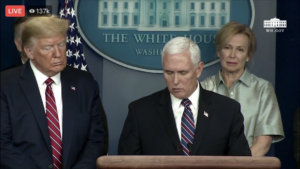 U.S. officials announced new restrictions on the Southern border Friday as they try to halt the spread of the coronavirus pandemic.

U.S. Secretary of State Mike Pompeo announced the closure of the U.S.-Mexican border on Friday, noting that it was decided in collaboration with the Mexican government.

Trump said that the U.S. with Mexico is suspending “non-essential travel,” not related to trade and commerce, at all ports of entry, which mirrors the moves made with Canada. He added that Mexico is also suspending air travel from Europe, which will help “protect the southern border” of the U.S. as well.

Acting Homeland Security Secretary Chad Wolf: “We want to make sure that cargo continues, trade continues, health care workers continue to be able to traverse that border. But tourism, some recreational activities and other things need to stop during this crisis.”

On Thursday, Mexican Foreign Minister Ebrard reiterated the importance of moving forward with the implementation of the USMCA in order to have new tools to provide certainty to the markets and to face the economic effects of the pandemic. The bilateral initiative would seek to maintain trade flows and economic activity between the two countries while including measures to deal with the spread of COVID-19 without having to paralyze the economic activity.