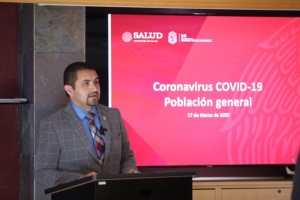 The Baja California government, through the state public health department, announced the first two confirmed cases of Coronavirus (CoVid-19), after carrying out the pertinent laboratory tests, in relation to two people residing in Mexicali, who traveled to the state of Washington, in the United States, weeks ago.

Alonso Pérez Rico, the State Public Health Department Officer in Baja California, stressed that the alert remains in phase 1, so the population is urged to abide prevention measures, such as frequent hand washing, use of hand sanitizer, as well as sneezing into your upper sleeve, as well as being attentive to the measures by the INSABI, and to the information provided by the media and official sources.

Likewise, he pointed out the importance of keeping calm, but without letting the guard down, establishing a moderate social distance, avoiding attending crowded places such as bars or restaurants, as well as meetings of more than 10 people. He emphasized the call to stay at home as much as possible, following the protocols institutions, schools and workplaces are taking.

He assured that the three levels of government are working in coordination to this phase 1, where prevention actions are being implemented, in pursuit of preventing the virus from spreading to more people.

Finally, people who have symptoms of a similar respiratory disease or who have doubts about their health condition are asked to contact public health at 800 00 44 800 in order to be duly assisted by phone, and if necessary, be transferred to a health unit or hospital.