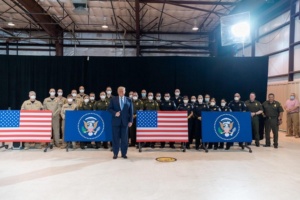 Speaking in 116 degrees of hot weather in Yuma, Arizona, President Donald Trump celebrated the completion of his border wall project and boasted about his work to stop illegal immigration.

In a speech before Arizona officials and members of the Border Patrol, Trump spoke about they have been able to reduce the flow of illegal immigration something that he promised during his campaign. The president also accepted the endorsement of the National Border Patrol Council.

“So we’re really, sort of, celebrating a lot of things. The incredible people right over there have done such an incredible job. That’s first and foremost. And I will say this: You’re setting records at the border. You’ve been unbelievable, and I know the wall is helping. You know, in two weeks, we will have hit 300 miles of wall. And this is a small version of it because, actually, the real deal goes up 30 feet. This is much smaller than that. But this is a small version of it. This is what the finish will be.” Trump said.

The Trump Administration has secured funding for approximately 445 miles of the total 722 miles of border wall requested. In addition, Trump ordered the hiring of 10,000 new ICE agents and 5,000 additional border patrol agents. The Department of Homeland Security arrested 796 MS-13 gang members and associates in FY 2017, an 83 percent increase from the previous year.

From President Trump’s inauguration through FY 2019 to date, U.S. Immigration and Customs Enforcement (ICE) made 269,419 arrests of illegal aliens.

Trump didn’t waste time to attack Joe Biden saying that his policies would be to open borders for illegal immigrants and drugs coming into the United States.

“Biden’s plan is the most radical, extreme, reckless, and dangerous immigration plan ever put forward by a major party candidate,” Trump said during the speech. “Joe Biden is the puppet of the radical left-wing movement that seeks the complete elimination of America’s borders and boundaries. They want to take the wall down. They don’t want to have borders. They want to have sanctuary cities,” Trump claimed.