Trump threatens tariffs and closing the border in 2020

President Trump threatens tariffs and could close the border in 2020 if Mexico does not stop the flow of drugs and migrants in 2019.

With “Baby Trump” they protested on Friday at Calexico. Trump gives Mexico a warning to stop the migrants and the flow of drugs to the United States or he will close the border and tax cars.

“President Trump gives Mexico a one-year warning to stop the flow of drugs and migrants or he will close the border between the two countries and tax cars, which would affect trade and the economy in North America.” Dr. Alejandro Díaz Bautista, economist, a national researcher at Conacyt and research professor at El Colegio de la Frontera Norte (El Colef).

The warning comes after the statement issued last week when he threatened to close the border unless Mexico stopped all illegal immigration in the United States. 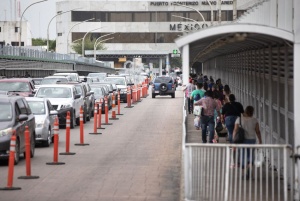 On Tuesday, his position seemed to soften when he told reporters that Mexico had begun taking more measures to prevent migrants from traveling to the United States. Trump also faced opposition from members of his own party, including Sen. John Cornyn, a Republican from Texas, who warned that closing the border would have “unwanted consequences.”

Trump traveled to Calexico, California, on Friday, where he visited a recently completed part of the border wall or barrier and participated in a round table with local law enforcement officials.

President Donald Trump has threatened to impose tariffs on cars produced in Mexico unless the country does more to prevent migrants from trying to enter the United States.

Trump told reporters at the White House on Thursday that, if “that powerful and less drastic incentive” does not work, he will continue with his permanent threat to close the US-Mexico border.

The tariffs on cars proposed by Trump contradict the agreement called T-Mec or USMCA with Mexico and Canada that exempt both countries from car tariffs.

While a giant inflatable balloon that simulates Donald Trump in diapers and angry face was flown last Friday in Calexico to welcome President Trump.