Trump Talks About Advances in Response to COVID-19 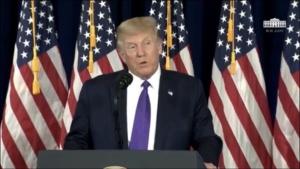 President Donald Trump says they have done the right thing when it comes to Covid-19.

Trump also shared that there are currently three COVID-19 vaccine candidates that are in Phase 3 of trials. He said he believed that the elderly and those who are considered at high-risk should be the first to receive the vaccine.

“I’m pleased to announce that as part of Operation Warp Speed, the federal government will be partnering with McKesson Corporation — great company, which is a major medical supplier — to rapidly distribute a China-virus vaccine as soon as one is approved — fully approved. They’re in stage three trials. We have many of them going along different passes. Also, many different companies doing them — very, very incredible companies.

“We currently have three candidates in phase three clinical trials and are on pace to have more than 100 million doses of a vaccine ready before the end of the year and 500 million doses very shortly thereafter. And we’re ready, logistically, to distribute them. Our military is ready. We have a great general who’s in charge. That’s what he does, is he distributes things — usually it’s people and weapons, tanks — but in this case, it’s a vaccine or a therapeutic, as it may be.”

In April, Trump said he directed $3 million to increase its manufacturing of N95 masks. By May, they had increased production by over a million masks a day. Trump also said they have worked with Honeywell to open factories in Arizona and Rhode Island.

“They’re now producing over 20 million masks a month,” Trump said during his press conference. “By the end of the year, domestic U.S. manufacturing will have produced over 1 billion N95 respirators, and all of them are made right here in the USA. That’s a big difference from the past.”

Trump said they have delivered more than $75 million in support to Puritan Medical in Maine. Puritan has a doubled their production of testing swabs from 20 million to 40 million per month.

“They’re doing a fantastic job, and so is Maine,” Trump said.

Trump also says that the US economy is experiencing the “fastest” recovery in history. He says retail spending is at an “all-time”.