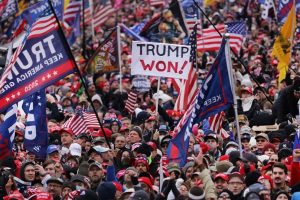 Angry supporters of President Donald Trump stormed the U.S. Capitol Wednesday, marching through the building, shouting and waving Trump and American flags, and forcing a halt to congressional deliberations over challenges to Joe Biden’s Electoral College victory. Senators were being evacuated.

Some House lawmakers tweeted they were sheltering in place in their offices. Demonstrators fought with Capitol Police and then forced their way into the building, not long after a huge rally near the White House during which Trump egged them on to march to Capitol Hill. Lawmakers had convened for an extraordinary joint session to confirm the Electoral College results but protests erupted outside the Capitol and government office buildings were being evacuated.

The Department of Homeland Security is sending additional federal agents to the U.S. Capitol to help quell violence from supporters of President Donald Trump who are protesting Congress’ formal approval of President-elect Joe Biden’s win.

A spokesperson told The Associated Press on Wednesday that officers from the Federal Protective Service and U.S. Secret Service agents are being sent to the scene. He says they were requested to assist by U.S. Capitol Police.

“Mike Pence didn’t have the courage to do what should have been done to protect our country and our Constitution, giving States a chance to certify a corrected set of facts, not the fraudulent or inaccurate ones which they were asked to previously certified. The USA demands the truth!” Trump tweeted.

Today was the joint session in Congress where they would make Joe Biden’s victory official.

Pence, who was presiding over the joint session of Congress, could be seen rushing out of the Senate chamber amid the sounds of throngs of protesters who surrounded the Capitol.

Trump later added: “I am asking for everyone at the U.S. Capitol to remain peaceful. No violence! Remember, WE are the Party of Law & Order — respect the Law and our great men and women in Blue. Thank you!”

A woman was reportedly shot inside the U.S. Capitol amid a melee with Trump supporters, sources told ABC News. She was seriously injured, sources said. It is unclear what led to the shooting or if law enforcement was involved.