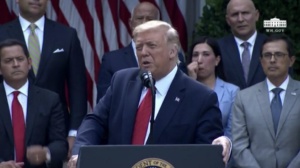 The event took place after Trump participates in a roundtable discussion with Hispanic leaders.

President Trump issued an Executive Order focusing on promoting the success of every member of America’s Hispanic community.

Trump said that while the virus caused damage to the economy, the country will return to prosperity.

“Great things will happen to Hispanic Americans as our economy makes a comeback,” Trump said.

This action is also to show the President’s support of school choice, apprenticeships and work-based learning initiatives, Hispanic Serving Institutions (HSIs), as well as investment in economically distressed communities and small and minority-owned businesses.