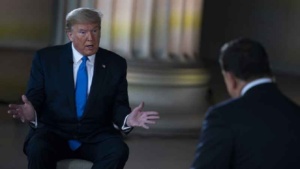 There are many questions that Americans have about how can get back on their feet after being affected by COVID-19.

Fox News hosted a town hall meeting between the President and citizens asking them a variety of questions.

President Donald Trump warned that the U.S. death toll from the coronavirus outbreak could reach 100,000 — revising upward his estimate of the number of people the outbreak could kill by tens of thousands.

When asked about people being divided over reopening the government and being concerned about it, Trump said:

“Well, I think you can satisfy both.  If you’re scared, you’re going to stay back a little bit and you’re going to watch it.  And I think anyone over 60 — because we have pretty good — we have a pretty good roadmap right now.  Anybody over 60 — you could say 65, but let’s make it 60 — we have to protect those people and we have to watch it, and maybe they stay back longer.”

Trump also criticized the World Health Organization for its reaction to COVID-19.

“And, by the way, you have World Trade and you have World Health.  The World Health Organization has been a disaster.  Everything they said was wrong, and they’re China-centric.  All they do is they agree with China, whatever China wants to do,” Trump said, “So our country — perhaps foolishly, in retrospect — has been paying $450 million a year to the World Health Organization.  And China has been paying $38 million a year, but they were more political than all of our leaders previous.  So we’ll see what I do with that.  I’m going to have to make a decision on that.”