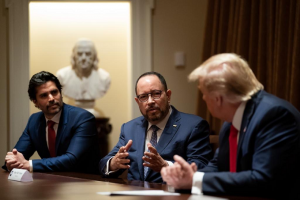 President Donald J. Trump announced his intent to Nominate and Appoint Individuals to Key Administration Posts. Among them is actor Eduardo Verastegui, of Florida, to be a Member of the President’s Advisory Commission on Hispanic Prosperity.

The actor has been considered to be part of the Trump administration and works alongside other Hispanic leaders and cabinet members to tackle issues such as school choice for Hispanic students and workforce opportunities.

“Thank you for the honor of allowing me to serve on the White House Commission for Hispanic Prosperity. I look forward to working to expand economic/educational opps for all Latinos in the US & strengthen Mexico-US ties like never before. #MAGA & #VivaMexico,” Verastegui stated on Twitter.

Appointed by the President, the Commission is composed of outstanding individuals with relevant experience or subject matter expertise in promoting educational opportunities and economic success in the Hispanic American community.

The Commission advises the President on matters pertaining to providing Hispanic American students, workers, and communities with increased access to educational and economic opportunities. The Commission meets periodically and works on key priorities for the Administration and Initiative.

“The success of Hispanic Americans is integral to the economic future of our country.  As more than 60 million Hispanics live in the United States today, Hispanics are the largest minority group in the country.  Hispanics are also the Nation’s youngest major racial or ethnic group.  Generations of Hispanics constituting different backgrounds and cultures have contributed to building a strong and prosperous America.  Their collective contributions continue a legacy of inspiration that is a cherished part of the American experience.” Trump said on July 9 when he signed an executive order establishing the White House Hispanic Prosperity Initiative.

Verastegui was part of the roundtable discussion with President Donald Trump.

Verástegui is an anti-abortion advocate, through the organization Manto de Guadalupe. Verástegui recounts an anecdote about his beliefs: he was doing research for his role in Bella and had gone to an abortion clinic as part of that process. While there, he started talking to a Hispanic couple who were going to the clinic for an abortion. He says that recognizing him from his telenovela roles on Mexican television, they listened as he described his upcoming role and the plotline of Bella. They reconsidered their decision and went home without going ahead with the abortion. Immediately after their child was born, they called him to tell him the good news and thanking him and asking for his permission to name the child Eduardo after him. He also made a point of meeting “little Eduardo” weeks later.

In 2008, he released a long video message denouncing the high rate of abortion in Hispanic communities in the United States and speaking out loudly about alleged targeting of the Hispanic communities with messages supporting abortion by the Barack Obama campaign during the presidential race.

Actively involved in charities, he has established Manto de Guadalupe, a pro-life organization with worldwide outreach and based in Los Angeles and offering a crisis pregnancy center for the underprivileged Latina women.