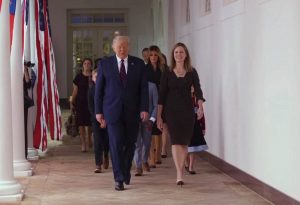 President Donald Trump nominated Amy Coney Barrett to be a judge at the Supreme Court. In a ceremony at the Rose Garden, Trump said he nominated her due to her qualifications and experience. Trump said she will follow the law and the constitution.

Last Saturday, Trump nominated Barrett to be the next Supreme Court Judge something that many people are concerned since she would turn the court conservative and overturn Roe v. Wade, Obamacare, and LGBT rights.

Amy Vivian Coney Barrett is an American lawyer, jurist, and academic who serves as a circuit judge on the U.S. Court of Appeals for the Seventh Circuit. Barrett’s scholarship focuses on originalism.

She is a constitutional scholar with expertise in statutory interpretation. Reuters described Barrett as “a favorite among religious conservatives,” and said that she has supported expansive gun rights and voted in favor of the Trump administration’s anti-immigration policies.

Barrett was one of Justice Antonin Scalia’s law clerks. She has spoken and written of her admiration of his close attention to the text of statutes. She has also praised his adherence to originalism.

Barrett was nominated to the Seventh Circuit Court of Appeals by President Donald Trump on May 8, 2017, and confirmed by the Senate on October 31, 2017. While serving on the federal bench, she was a professor of law at Notre Dame Law School, where she has taught civil procedure, constitutional law, and statutory interpretation.

Eleven months after her confirmation to the Seventh Circuit Court of Appeals in 2017, Barrett was added to President Trump’s list of potential Supreme Court nominees. On September 25, 2020, it was reported by numerous media outlets that Trump intended to nominate Barrett on September 26, 2020, to succeed Ruth Bader Ginsburg on the United States Supreme Court.