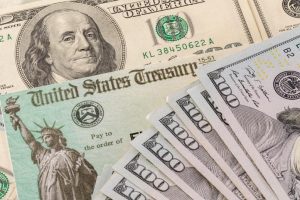 President Donald Trump will not be supporting the stimulus package that was approved by Congress last week.

The House passed a $2.2 trillion coronavirus stimulus package last week, adding additional pressure on Republicans and the White House to make a deal on new pandemic legislation before Congress is expected to take a recess until mid-November amid election season.

The Democratic-controlled House voted 214 to 207— largely along party lines — to pass the bill, which is a scaled-down version of the $3.4 trillion HEROES Act that was passed in May but was never taken up by the Senate.

In a series of Tweets, Trump explained his reasons:

“Nancy Pelosi is asking for $2.4 Trillion Dollars to bail out poorly run, high crime, Democrat States, money that is in no way related to COVID-19. We made a very generous offer of $1.6 Trillion Dollars and, as usual, she is not negotiating in good faith. I am rejecting their request and looking to the future of our Country. I have instructed my representatives to stop negotiating until after the election when, immediately after I win, we will pass a major Stimulus Bill that focuses on hardworking Americans and Small Business,” Trump stated and continued, “I have asked Mitch McConnell not to delay, but to instead focus full time on approving my outstanding nominee to the United States Supreme Court, Amy Coney Barrett. Our Economy is doing very well. The Stock Market is at record levels, JOBS, and unemployment also coming back in record numbers. We are leading the World in Economic Recovery, and THE BEST IS YET TO COME!”

The updated HEROES Act provides another round of stimulus payments of up to $1,200 to individuals earning an adjusted gross income of up to $75,000 and $2,400 for couples earning up to $150,000, as well as an additional $500 per dependent, which includes full-time students below age 24 and adult dependents.