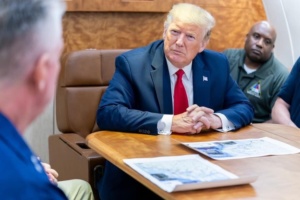 President Donald Trump is looking at classifying drug cartels as terrorists. That’s what the president said Tuesday during an interview with journalist Bill O’Reilly.

“They will be designated … I have been working on that for the last 90 days. You know, the designation is not that easy, you have to go through a process, and we are well into that process,” Trump said. Recently, President Trump suggested having the U.S. military help Mexico in the drug war and eradicate the cartels once and for all.

In a statement from the Ministry of Foreign Affairs, they said the Mexican government entered into communication with the corresponding authorities of the United States to know the content and scope of the statements made.

Likewise, Foreign Secretary Marcelo Ebrad will establish contact with his counterpart, Michael R. Pompeo, in order to discuss this very important issue for the bilateral agenda.

“By virtue of the good relations that exist between the two countries, the Government of Mexico will seek to have a high-level meeting as soon as possible to present Mexico’s position and know the views of the United States authorities.  As in other issues on the bilateral agenda, the Ministry of Foreign Affairs will promote dialogue and a roadmap that will allow us to move forward to reduce arms and money movements to organized crime from the United States to Mexico, as well as chemical and drug precursors that cross our territory to the north country.

“For what is inferred from the declaration, and based on the information that the authorities of our neighboring country have sent us so far, it is estimated that the meeting proposed by Mexico will take place in the near future.  The Government of Mexico will continue its diplomatic work towards an understanding that, from cooperation and intelligence, allows the fulfillment of the security of both countries.”