Trump Could Be Impeached a Second Time 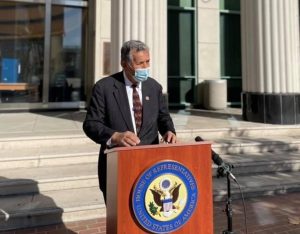 History could be made this week if Democrats vote to impeach President Donald Trump for a second time during the final days of his administration.

A growing number of Democrats are calling for the President’s impeachment due to the riots that took place last week at Capitol Hill. One of them is Rep. Juan Vargas who represents Imperial Valley and San Diego.

“He’s become completely irresponsible now, very angry,” Vargas said. “And at the same time, he has his hands on all of the nuclear codes. He could launch a nuclear attack tomorrow. This man is dangerous. He needs to be removed from office.”

The US House of Representatives could vote as early as Tuesday on an article of impeachment against President Donald Trump. Trump was impeached in 2019 for allegedly soliciting Ukraine’s interference in the 2020 election. He was acquitted in the Senate.

“The executive attacked the legislator. He whipped up this mob into a frenzy,” Vargas said. “He sent them down to Capitol Hill and he had to invade our house to prevent us from changing government.”

Vargas added Trump is a danger to the country and needs to be removed before the end of his term.

“He is a clear and present danger to our country, to our nation, to our society, and our world,” Vargas said. “He must be impeached, impeached immediately.”

House Speaker Nancy Pelosi said they will introduce a resolution that calls on the Vice President to convene and mobilize the Cabinet to activate the 25th Amendment to declare the President incapable of executing the duties of his office, after which the Vice President would immediately exercise powers as acting President.

“If we do not receive Unanimous Consent, this legislation is planned to be brought up on the Floor the following day.  We are calling on the Vice President to respond within 24 hours,” Pelosi said. “Next, we will proceed with bringing impeachment legislation to the Floor. In protecting our Constitution and our Democracy, we will act with urgency, because this President represents an imminent threat to both.  As the days go by, the horror of the ongoing assault on our democracy perpetrated by this President is intensified and so is the immediate need for action.”