Trump Claims Democrats Are Trying to Steal the Election 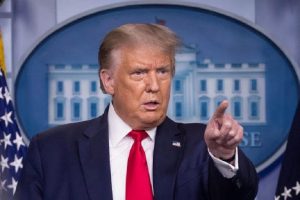 President Donald Trump is accusing Democrats of trying to steal the election and says there has been voter fraud.

Trump spoke Thursday evening from the White House, the first time that he has addressed the public since his remarks in the early hours of Wednesday morning after election night. His campaign has brought or threatened lawsuits in several closely contested states in an attempt to stop the counting of votes it is disputing.

The Trump campaign filed lawsuits this week demanding ballot-counting be suspended in several states that are key to winning the White House, while also signalling its intent to demand a recount in Wisconsin.

Trump added that he won “the largest share of non-White voters of any Republican in 60 years.” Among Hispanics, he has 35 percent support, up from 28 percent in 2016.

“For the first time ever, we lost zero races in the House,” Trump said. No Republican incumbents were unseated in the House, and GOP challengers flipped seven seats.

The battleground states are still too close to call at this moment and major election lawsuits will be seen in the next few weeks.