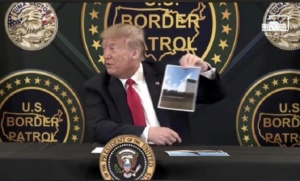 President Donald Trump visited Yuma to see the successful completion of the border wall. He met with U.S. Customs and Border Protection on the progress of construction at the border with Mexico. The president saw the 200th-mile wall project along the U.S./Mexico border that was a key promise of his campaign.

“This is the most powerful and comprehensive border wall structure anywhere in the world. It’s got technology that nobody would even believe between sensors and cameras and everything else,” Trump said.

Trump also spoke about the success of his administration in lowering illegal immigration.

“That’s made a big difference, but we have other things that we’ve done. During the past two months, we’ve seen the lowest number of illegal border crossings in many years. Illegal immigration is down 84% from this time last year, illegal crossings from Central America are down 97%.” Trump said.

Trump signed a commemorative plaque recognizing completion of 200 miles, though all but a handful of those miles involved reinforcing and replacing existing barriers.

The Trump wall commonly referred to as “the wall”, is a colloquial name for a proposed expansion of the Mexico–United States barrier during the U.S. presidency of Donald Trump. Throughout his 2016 presidential campaign, Trump called for the construction of a much larger border wall, claiming that if elected, he would “build the wall and make Mexico pay for it.” At the time, President of Mexico Enrique Peña Nieto said that his country would not pay for the wall.

In January 2017, Trump signed Executive Order 13767, which formally directed the U.S. government to begin attempting wall construction along the Mexican border using existing federal funding; actual construction did not begin at this time due to the significant expense and lack of clarity on how it would be funded.

Beginning December 22, 2018, the federal government was partially shut down for 35 days because of Trump’s insistence that he would veto any spending bill that did not include $5.7 billion in border wall funding.