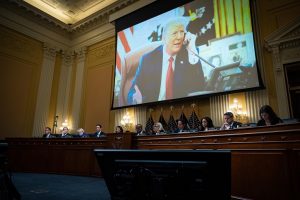 The Jan. 6 select committee voted unanimously Thursday to subpoena Donald Trump, a remarkable bid to tie up one of its last remaining threads of what occurred that day.

The subpoena vote came as the select committee released new details as part of its likely final televised effort to outline evidence that Trump was singularly responsible for the violence of the Capitol riot and the erosion of democratic institutions leading up to it.

In a letter addressed to committee chairman Democratic Rep. Bennie Thompson of Mississippi, the former President doubles down on fraudulent claims that the 2020 election was stolen and insists the committee should have instead looked into these claims.

On January 6, 2021, following then-U.S. President Donald Trump’s defeat in the 2020 presidential election, a mob of his supporters attacked the Capitol Building in Washington, D.C. They sought to keep Trump in power by preventing a joint session of Congress from counting the electoral college votes to formalize the victory of President-elect Joe Biden. According to the House select committee investigating the incident, the attack was the culmination of a seven-part plan by Trump to overturn the election. Five people died either shortly before, during, or following the event: one was shot by Capitol Police, another died of a drug overdose, and three died of natural causes. Many people were injured, including 138 police officers. Four officers who responded to the attack died by suicide within seven months. As of July 7, 2022, monetary damages caused by attackers exceed $2.7 million.

More than 2,000 rioters entered the building, many of whom occupied, vandalized, and looted it, assaulted Capitol Police officers and reporters, and attempted to locate lawmakers to capture and harm them. A gallows was erected west of the Capitol, and some rioters chanted “Hang Mike Pence” after he rejected false claims by Trump and others that the vice president could overturn the election results. Some vandalized and looted the offices of House Speaker Nancy Pelosi (D‑CA) and other members of Congress. With building security breached, Capitol Police evacuated and locked down both chambers of Congress and several buildings in the Capitol Complex.

Trump resisted sending the National Guard to quell the mob. Later that afternoon, in a Twitter video, he reasserted that the election was “fraudulent” but told his supporters to “go home in peace”. The Capitol was clear of rioters by mid-evening, and the counting of the electoral votes resumed and was completed in the early morning hours of January 7. Pence declared President-elect Biden and Vice President-elect Kamala Harris victorious. Pressured by his administration, the threat of removal, and many resignations, Trump later committed to an orderly transition of power in a televised statement.