Trump Begins His Campaign in Oklahoma 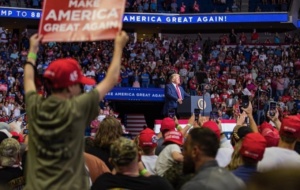 US President Donald Trump has held his first campaign rally since March when the US coronavirus lockdown began. There were concerns the event could increase the spread of Covid-19.

Just hours before the rally, the campaign said six staff members involved in organizing it had tested positive. The crowd was still large for a campaign event, but it was nowhere near what had been billed. The campaign had boasted of more than 1 million ticket requests — knowing that the venue could never hold that many people.

Trump quickly blamed the “fake news” for discouraging turnout and said “we had some very bad people outside, they were doing some very bad things,” intimating that his supporters had been prevented from entering the arena.

People attending had to sign a waiver agreeing not to sue the President if they get COVID-19.

The sign-up page for guests to register for tickets for President Donald Trump’s rally in Tulsa, Oklahoma contains a disclaimer stating attendees “voluntarily assume all risks related to exposure to COVID-19” and agree to not hold Trump’s campaign, the venue or any affiliates liable for any illness or injury.

The editorial board of Tulsa World, the local newspaper of the city, opposed this rally saying it was a danger for public health.

Trump also claimed Saturday that the “silent majority is stronger than ever” and touted Republicans as the “party of Abraham Lincoln” and “law and order,” in comments appearing to indicate how he will frame his reelection campaign as the November election approaches.

Trump early in his remarks touted reform to the U.S. Department of Veterans Affairs, the breakneck pace at which the Senate has confirmed his judicial nominees and tax cut legislation he signed into law.